the lost and found 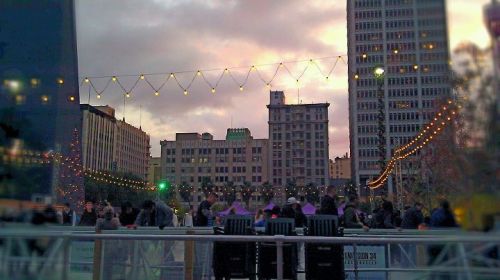 There is a peculiar kind of love I have for Christmas. A kind of unconditional, peculiar love not applicable to my parents nor of or for the usual benign gift-wrapped associations of which accompanies the holiday. It blooms from my belief of it’s being the only time of year reprieve from moral abjection is granted to the City of Angels. Los fucking Angeles.

Among the fertile, fecundate shit, piss and squalor on the gray city sidewalks, the laughter of children is the sole constituent that could resuscitate the earth’s earnest, human altruism. At the least, be the foremost leap towards it’s ideology. Pershing Square at Christmas time must be the expectant epicenter because it is the only place within Downtown L.A. safe enough for a congregation of cheerful children.

By children, I refer not only to the short, pedantic, underdeveloped, revokees of roller-coaster access, chilli-drens, but also their taller, geriatric, intellectually regressive, one-night-standing-around-without-a-clue, a-dull-ts. Young, old, and in-betweens will find no segregation of brand-name decades there because there, and only there, we are all the children of our epoch. Malice is granted no quarter and offered no solace there. Of course, house-rules always answer to chance. Fortunately, the worst thing that can happen here would a few bruised cheeks of asses. The ice should help! Maybe a sprained ankle if you forgot to pack sensibility in your lunch.

No one was capable of disappointment, depression, or discontent. Supervised liberty. Like that time you didn’t make a big thing of telling your parents of the first friend you’d made at school, or the night you couldn’t sleep because of a scary movie you were told not to watch but did anyway because it was your first co-ed sleepover, or the way you were rude to some kid you liked being around for inexplicable reasons but later realized the kid was your first playground crush. -Every kid was rich with wonder and uncertainty. A magic trick I don’t know the trick to! Every person, essentially kids, on that ice rink reached into their private accounts. And hidden in the safety deposit box of a soul was that shiny, tiny bit of visceral vigor of youth they’d presumed washed away with the deluge of adulthood.

There on that frosted Los Angeles ice-rink, nestles the fleeting innocence of which we were all once wealthy with. Pershing Square, the lost and found.

One response to “the lost and found”